Winter sports in the Zittau Hills (and vicinity)

From August to April, the ice sports arena in Jonsdorf offers an ice surface of 1800 square metres for free skating, ice disco, ice hockey and curling. Skates can be rent, and there is a restaurant inside. On a fifteen metres high climbing wall, you can train climbing all the year. In the iceless spring and summer months, the arena is used for concerts, events and celebrations of different kinds.

Route: From Zittau through Olbersdorf to Jonsdorf. In Jonsdorf, after several hundred metres, turn right to the arena.

In winter, the town Hrádek has an ice pavillion for skating. It is situated at the sports centre in the U Koupaliště street, in the large tent next to the Tennis restaurant. The opening hours for free skating are very limited because the pavillion is also used for ice hockey and school sports. Often, the opening hours are changed at short notice, depending on the number of visitors. Admission per day: 50 kč (about 2 €) for adults, 30 kč for children.

Opening hours can be found there under the keyword „bruslení“. |

Liberec has got a big, modern, multifunctional sports arena – the Tipsport Arena. It is the home of the White Tigers (Bílí Tygři, an ice hockey team) and the Condors (Kondoři, a basketball team). Apart from several sports, the arena is also used for rock concerts and dance events. The building contains a cold chamber for cryotherapy, too.

Directions: The rink is located east of the town Zgorzelec close to major shopping markets (Real, Castorama, Galeria Słowiańska…). Leave Zgorzelec on the road number 30 in the direction Jelenia Góra. Right behind the roundabout, in the village Łagów turn left to the shopping center Galeria Słowiańska. The rink is on your right then in a white hall next to Leroy Merlin. Address: ul. Jeleniogórska 44,  Łagów,  59-900 Zgorzelec

There is a long ski trail through the entire Zittau Hills from the east to the west.
Besides, there are several local loop trails for cross-country skiing:

In 02799 Waltersdorf, Hauptstraße, at the north-eastern slope of Mount Lausche

The area at Mount Lausche is the largest and most important skiing area in the Zittau Hills. It offers several slopes with different degrees of difficulty (blue, red and black). Due to snowguns, skiing is possible here even in snowless winters. At the Lausche slopes, there are three lifts:

Behind the Rübezahl lodge, luging is permitted on the fringe of the ski slope. There is also a ski rental, and during season, a ski school for beginners takes place almost every day.

During season, the local ski club offers parking space near the main ski slope. Its entrance is situated at the terminal loop of the bus stop Waltersdorf Skiheim.

Otherwise, the nearest public parking area is 1 km away, at the road Windgasse. More nearby, along the street Hauptstraße, there are a few privately owned parking lots which can be rent. Above at the Rübezahl lodge, there is a spacious parking area, but it is designated for guests of the hotel and the restaurant. For other parkers, it is very expensive. In winter, the upper end of the street Hauptstraße is drivable with snow chains only. Shortly below the ski area, a ski and luge trail branches off the Hauptstraße. It leads directly back to the public parking area at the road Windgasse.

In 02799 Waltersdorf, district Neu Sorge, at the southern slope of Mount Ottoberg

Map of the Waltersdorf ski area

Ski slope with T-bar lift, 205 m long, 45 m elevation. This is a clear site with little downhill grade, very suitable for beginners. Luging is permitted on the neighbouring trail Eisgasse.

At the southern slope of Waltersdorf’s Mount Butterberg, there is a beautiful, large sledge slope. From here, you have a magnificent view of Mount Lausche. Below the slope, there is a playground and parking space, and a snack stall directly at the street corner.

Horní Světla, community 471 57 Krompach, at the south-eastern slope of Mount Lausche, about 3 km on foot from the border crossing in Waltersdorf
Web site: www.skiluz.com

There are two drag lifts and two slopes:
– U Pitkina: 650  m long, 101 m elevation, easy slope for beginners with a snack stall.
– Na Třináctce: 550 m long, 92 m elevation, a bit more difficult, for advanced skiers.
Both slopes are illuminated in the evening. Tickets are valid for both lifts. In the area, there is also a snow park for snowboards.

There is parking space for 100 cars. Coming by car from Germany, you have to take a long way round though Seifhennersdorf and Varnsdorf because the border crossings in the Zittau Hills are for walkers only. 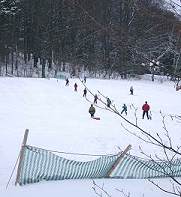 In 02796 Jonsdorf, at the railway station, at the western slope of Mount Jonsberg

There is a drag lift, a short slope, gentle and clear, very suitable for beginners. One side of the slope is for skiers only, the other side is used mostly by lugers, but there is no strict separation. Since the slope is situated directly above the railway station, you can comfortably go there by the narrow gauge steam train. In the railway station building, there is a small restaurant. Many other restaurants are nearby, as the site is quite in the centre of Jonsdorf.

Directly next to the slope, there are a few parking lots free of charge, normally they suffice. Otherwise you can find public parking space with costs some metres down the road Zittauer Straße.

The ski area at the Johannisstein has a drag lift. The slope is mostly gentle and clear, only a few sections are a bit steep. One side of the slope is reserved for skiers, the other side for lugers. Ski rental is on site.

, and above at the lodge Kammbaude

are not far away either.

In 02797 Oybin, district Hain, Hochwaldweg, at the northern slope of Mount Hochwald

The Hoppe slope (Hoppehang) is only 200 m long, but it is quite popular with skiers and lugers because of its favourable location. Since there is no separation between skiers and lugers, there is sometimes a bit of chaos. There is no lift. The slope is gently steep, suitable for beginners, too.

Nearby parking spaces with costs: at the corner Jonsdorfer Straße – Grenzstraße

, and above at the lodge Kammbaude 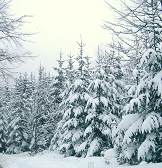 In 02797 Oybin, starting on the northern slope of Mount Hochwald, ending on Alte Rodelbahn street in Oybin

From the top of the Hochwald

, you can luge a 2 km long trail, passing the district Hain, unto Oybin. About 300 m difference in altitude allow a fast ride. The sledge trail diagonally crosses the road Neue Hainstraße

The 1.2 km long Thomasweg is a hiking trail that leads from the trail Alte Leipaer Straße

unto the centre of Oybin. Due to its 120 m difference in altitude, skiers and lugers like to go downhill there in winter.

There is parking space, free of charge, at a hiking trails’ crossing named Stern. 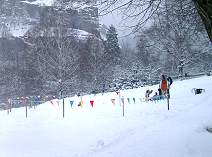 Almankawiese is a small sledge slope in the centre of Oybin, face to face with the Almanka restaurant. Due to its gentle descent, even small children can safely luge here. From the slope, you have a magnificent view of the hillside church and the castle ruin.

There is parking – as far as permitted – in the surrounding streets. A public parking space with costs is about 500 m away behind the snack stall at the street Friedrich-Engels-Straße

Very popular are the more distant, but much bigger ski areas in the Giant Mountains (e.g. Rokytnice and Harrachov), and the area at Mount Ještěd near Liberec. The winter sports area at Mount Ještěd has been largely expanded for the nordic ski world cup in 2009. Even in Czechia, skiing is no really cheap amusement any more, but in comparison to the famous ski areas in the Alps, the prices are still moderate.

Extensive Information on the ski area at Mount Ještěd can be found at www.skijested.cz